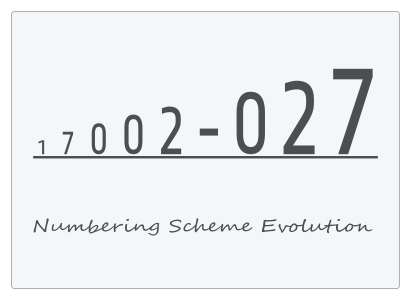 This means we had all the numbering schemes we could have at once. Sadly, I don’t have any examples to show you.

At the university, we never gave much importance to the numbering of drawings. All the professors cared about was that we made the drawing according to the ISO standard!

This is an example of a weldment drawing. As you can see its’ parts are also on the drawing. 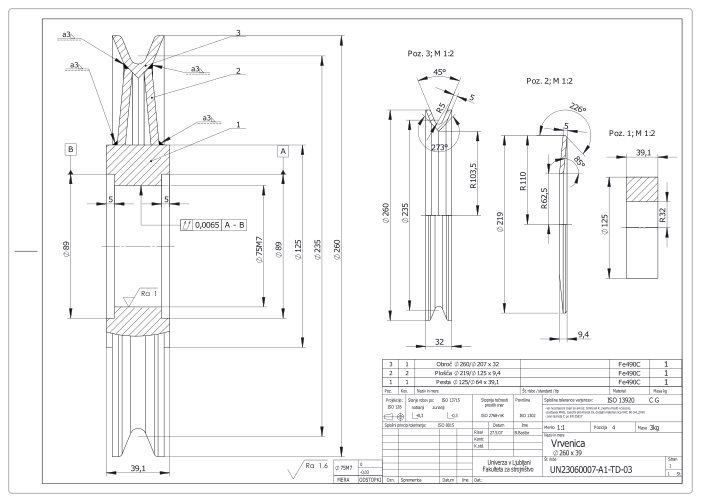 My first employer was a start-up company that made sports equipment. Because I was the first mechanical engineer there, I had to come up with a numbering scheme. It turned out to be complicated and significantly hierarchical. Not a surprise, is it?

To make this blog post more readable, I made a diagram to explain the numbering schemes and an additional diagram to show how it looked on a project. 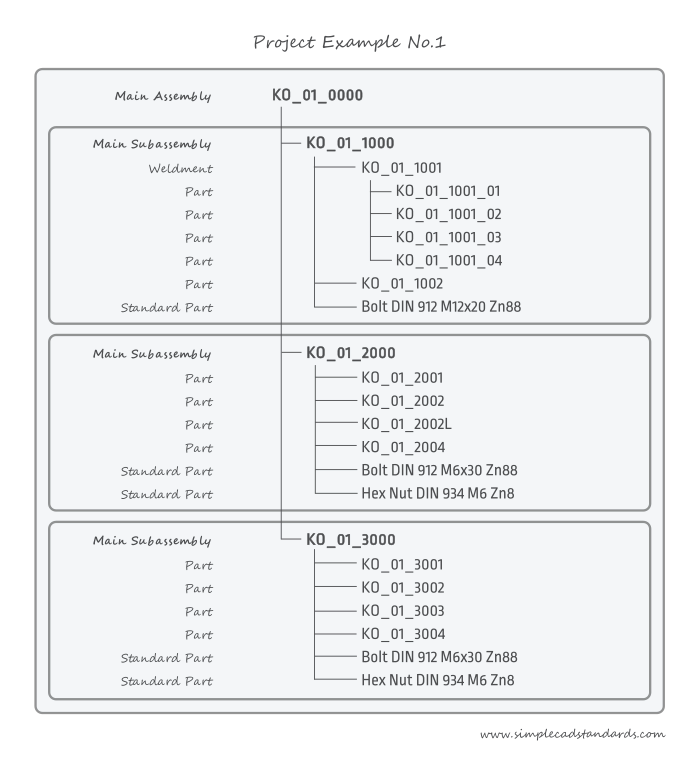 But soon this numbering system came crashing down on me.

According to ISO standard, one should have all the parts of a weldment on the weldments drawing. After some time, I realized that if the weldments’ parts are made by two different manufacturers and then welded by a third manufacturer, I damn sure want to have a separate drawing for each part so I can send it to each manufacturer! And if I was going to make drawings for each part, why should they be hierarchically positioned under the basis number of the weldment (KO_01_1001)?

The next problem appeared when I used the same part in two different subassemblies. How will I number that part? After the first subassembly or after the second? And what if I had to machine the weldment afterwards, how would I get another level in it?

Looking at it now, it was a real mess and very complicated.

Being self-employed, I knew I had to come up with a better numbering scheme that I could use with multiple customers.

One day I got a call from the manufacturer that was making the parts for the second version of a product. He said: “Hey Barbara, I need some help. Can you please tell me which parts have actually changed in comparison with the first product we made?”

You see, when I was working on a new version of the product, I copied the whole main assembly via “Pack-and-Go” and replaced the old project number with a new one (KO_01 -> KO_02). The manufacturer had all the CNC code saved according to the last products’ numbers, but now the drawing numbers were different although some parts remained the same. This was when a light bulb lit up: one part should have one number even if used in multiple products, and if it changes it should get a revision. Eureka! I think this was the first time I typed “CAD numbering” system into Google.

I did some research and found that non-significant numbering is the way to go. So, I came up with a new numbering scheme. 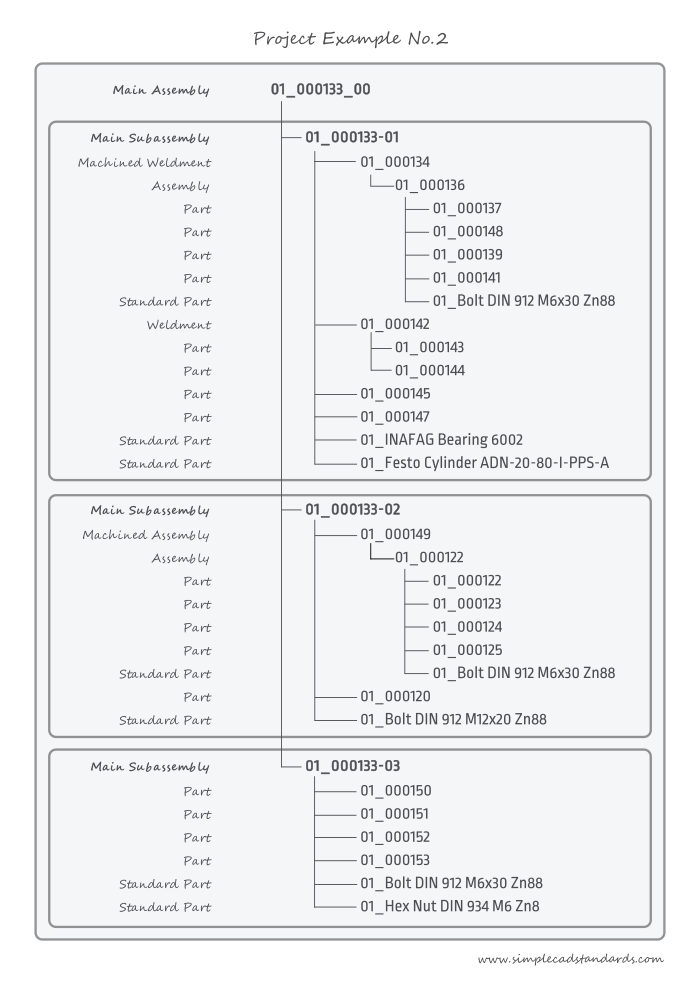 The first two digits were customer digits, and the last six were for the parts, assemblies, weldments, etc. I tried this system for some time, but it got very hard to manage and to keep track of which part was used where. And if I made a change to a part it could have affected other projects that were already finished! I also had problems with folder organization. Besides all that, I had to manage an Excel table to keep track of the numbers. All this became very time-consuming.

Although we are aware of all the benefits that a totally non-significant numbering scheme has, we kept some significance to make it easier for people to interact with the projects' documentation. 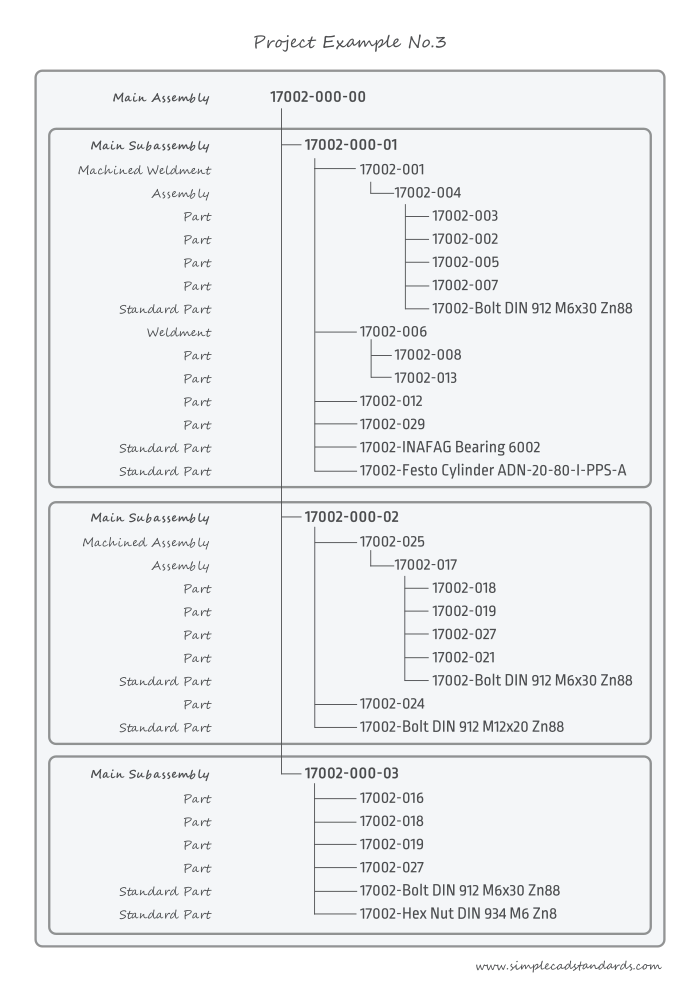 Keep in mind that for all our numbering schemes the filename of the drawing and the model matched the drawing number.

As you can see from the example above, a number begins with the project number (17002) and is then followed by a 3-digit number (or 4 digits for larger projects). If these 3 digits are 000, this means you are looking at the main assembly or one of its’ subassemblies that we call “main subassemblies”. If these 3 digits are anything else then 000, then you are looking at a part or a lower level assembly. In case it is a standard part, we designate it with the needed ordering information.

The negative side of our numbering scheme is seen when a remake of a project occurs, which does not happen very often. But when it does, we use the old project and copy it via “Pack-and-Go” to the new project location with the new project number at the beginning of each file. After we send the files to the manufacturer, we notify him to pay attention if he will be using the code from the old project, because each part could be different. In most cases, manufacturers don’t care much about it after all.

We could avoid this issue if we used a non-significant 6-digit scheme. But as I said before, managing this without PDM would be very hard and time-consuming. With keeping the project number at the beginning of each CAD file, I know that this CAD file can only be used in one particular project. And if I change it, I can’t ruin any other projects that are already finished. Having this checked up gives me peace of mind.

Although we are using PDM now, we still kept the same numbering scheme as before. But I am thinking of testing a non-significant numbering scheme with PDM in the future because if I figure out how to make it a no brainer, it could be a nice upgrade to our current system.

We would like to show examples of different numbering schemes on this blog. Anyone is welcome here. If you are willing to contribute, please contact me via barbara@simplecadstandards.com