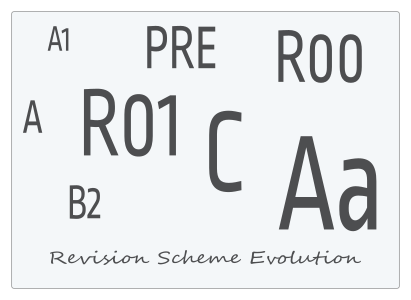 Besides numbering schemes, revision schemes are also a very popular topic among engineers – to argue about. The intention of this post is not to stoke that fire, but to tell a story about how I was confronted with revision handling and the different ways I have tried out with our project-based work in SolidWorks.

The company I was working for as an apprentice, had no revision scheme, or at least they never told me about it. Although the company outsourced all their manufacturing, they did it without putting revision labels on the drawings.

The reason for this could lie in the fact that the changes were usually made during the assembly process, which was done in house. When a change was needed, they performed it right in place and, if they had the time, they wrote it down on a “Changes made sheet”. If the change needed to be outsourced, the responsible engineer made the change in CAD and released a new drawing that was sent to the manufacturer.

I have no idea how the manufacturers knew which version had to be produced but, to me, it seemed they had figured it out, because we didn’t have many problems with this procedure.

After the project was out of house, the engineer should have put all the changes from the “Changes made sheet” to CAD for future reference. Usually, this never happened.

At university, we really did not put a lot of focus on revisions. “Revisions are letters you put in the revision table where you write what you have changed.” This was pretty much it!

My gosh, if I think back now, they did not teach us anything about interchangeability and other things you are confronted with the second after you release the documentation of your first product. I need to check if anything has changed in the last 10 years since I last attended a “Technical documentation” class.

MY FIRST JOB WAS AT A START-UP

As I mentioned in my last post, I was the first mechanical engineer at the company, so I had to come up with my own CAD standards. Well, since I did not have any experience with revision handling, I did not know how to handle it after the first product went to production. But I did know that I have to somehow let the manufacturer know which drawing is the latest. Ok, so I put the revision letter in the bottom right corner of the drawing.

Great, this was handled! But what about the STEP file? How will the manufacturer know which STEP file or DXF file is the latest revision if the filenames stay the same? This would make a mess on his computer! After thinking about this, I started adding revisions to the filename! And this worked like a charm! I can see your experienced faces now fold, but hey, to this day I have not found a simpler way to handle this with SolidWorks! Because the filename was directly linked to the drawing title block and also to the parts list (BOM), everything was up to date.

The downside of renaming SolidWorks files is that you have to rename them via SolidWorks Explorer to preserve the references. When you have small projects, this is done pretty fast, but with large projects, this can get time consuming.

Because I always kept the revision information on the filename with this system, it was automatically transferred to the exported files (STEP, DXF, PDF…).

Our company remains to this date project-based, and we never use one CAD file in two different projects. This way, we eliminate the interchangeability issue across different project folders. All we have to care about is to track all the upper-level model and drawing files that also need to have a revision, because they have changed as a result of a change on a lower level. I know that the majority of readers know what I mean, but just for the sake of getting everyone on the same page, I will give an example.

Let’s imagine a dining chair made of bent tubes and with a bent seat and back support. Something like this.

Before we started using PDM, this kind of change meant we would have to repeat the rename process on four model files plus four drawings, and all of this only because one part changed. For large projects, I estimate that the renaming of a model file took up to 20 sec. Fortunately, we didn’t have to rename drawing files via SolidWorks Explorer, so this got done a bit faster.

With no PDM in place, we had to manually keep track of all the files that needed a new revision label. Sometimes it happened that we forgot to rename a file and, usually, we noticed it after the manufacturing files (PDF, DXF, STEP) had already been exported. This meant we had to manually correct the filenames of the STEP and DXF files and also export at least two new PDFs.

With no PDM in place, our revision scheme looked like this:

Let’s say that the bent tube from before has a model number 17002-003. The diagram below shows us how the revision scheme would turn out for this part: 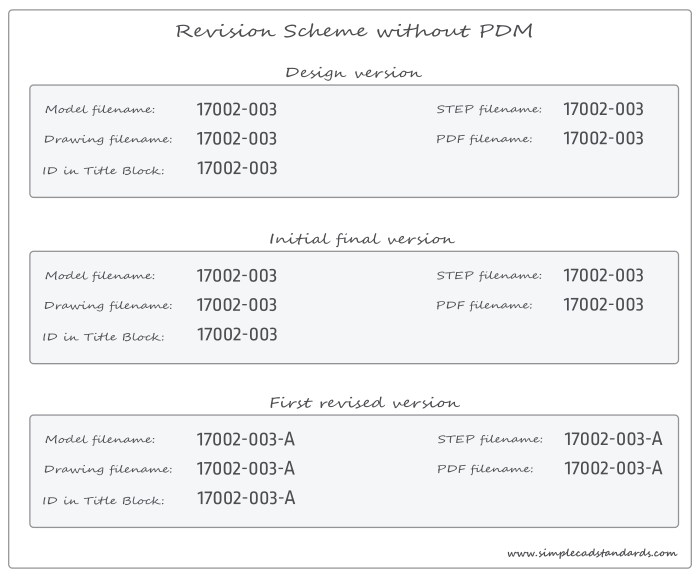 As you can see, the filenames change, and because of this, the exported files also get the same filename as the original file.

With time our projects became bigger, and they got harder to manage. So, we implemented PDM.

For PDM projects, the revision label is saved as a separate custom property value that is added to the filename during the PDM export task.

A downside of this process shows up when a customer wants to have a STEP file (or 3D-pdf, or eDrawings) of the top assembly. In this case, the revision label can only be seen in the filename of the top assembly, but it is not transferred to the lower level assemblies and parts in the STEP structure. The previous revision handling system that required renaming files handled this! Of course, there are also options to handle this in PDM, but they require custom-made tools which cost money.

By implementing PDM, we also made a change in our revision scheme:

The diagram below shows the new revision scheme on the same example as before: 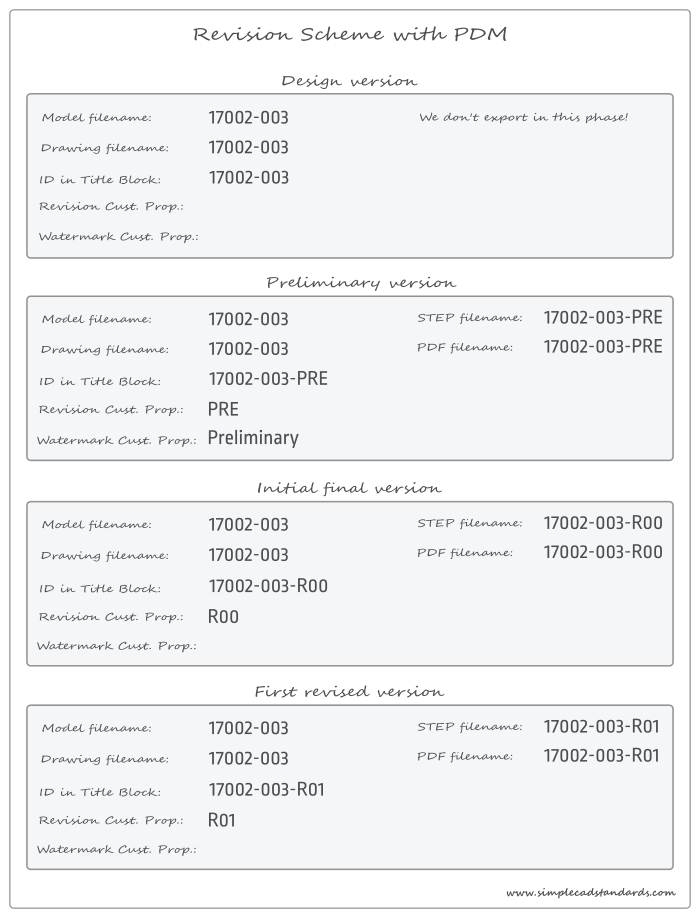 As you can see, the filenames of the native files remain the same through the process. But the “Revision” custom property changes with each phase and it is transferred during the export task to the neutral filenames.

Our previous revision scheme did not distinguish between a PDF drawing that was still in a design phase and a PDF drawing that has already been released for production (initial final version). The issue with this showed up when we sent the files to the manufacturer for checking before the design was even finished. The manufacturer usually printed out all the drawing files we sent him, and these paper versions kept lying on his desk for a while. When we sent him the final version, the drawings could have gotten mixed up pretty quickly because they had the same ID in the title block. How should he know which one he had to manufacture?

This is why we chose to include a “Preliminary phase” that would serve for design checking and estimating of manufacturing costs before the design was even finished. Besides the label PRE, the drawing also gets a watermark, to make it more obvious for the manufacturer that this drawing is not meant for production. With this system, the chance of not getting the right parts manufactured diminishes.

All these revision changes are handled automatically during the workflow transitions. The downside with PDM is that we still need to select and check-out all the files that we need to make a revision on. SolidWorks PDM Professional 2018 is still a bit clumsy with this, because it does not allow you to select and check-out all the files you need at once. The 2019 version seems to handle this a bit more intelligently.

Other useful sources about this topic:

Here are some more links to other resources one should check if looking for a new way to handle revisions:

·         An alternative to keeping the parts’ info on the model: Joe Brower; Embedded Title Block

·         Don’t know if it is a revision or a new part: Jörg Eisenträger; Item Interchangeability Rules

·         And a must read for every CAD admin: Frank B. Watts; Engineering Documentation Control