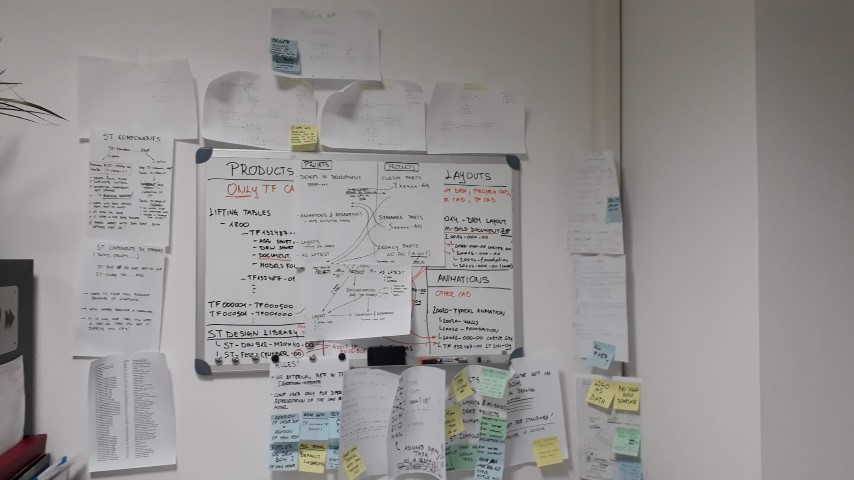 Finally, the time has come to change our outdated numbering scheme so I decided to share it with you. Here are some quick insights:

If you check out my post from 2019, you can see that our old document numbering scheme was designed hierarchical. The first 5 numbers were the project numbers and then there were 3 or 4 digits that were non-significant. But there was an exception for the top-level assembly and the main sub-assemblies. Basically, it looked like this:

This numbering scheme worked very well until we became the technical office for a new customer. By then we were doing mostly engineering and technical documentation for one-of-a-kind devices. But when we started working with this new customer, the negative side of that numbering scheme began to show quickly and it got worse with each new device we designed.

To give you just a quick insight: the new customer makes large production lines and they do between 2 and 3 per year. Each production line has around 100 devices that would be treated as a standalone project in our previous system. The problem arises because some of the devices use the same items,...”What project number should the document have and where should it be stored then?” These and similar questions all pointed to one solution:

We need a highly non-significant numbering scheme that will “allow” items to be used on different devices without misinterpretation.

And we also need a completely new system to support it…(that was the hardest part!)

Actually, I tried this kind of numbering scheme back in 2014, because I was already aware of the cons of my hierarchical scheme. But at that time, I didn’t have PDM. This meant that I had no lock-out ability that would prohibit me from making changes to files and documents that I should not be changing. Basically, it was a very unstable system and not very nice to work with. Eventually, I got back to keeping all my documents (including fasteners) under a specific project folder with a strict policy that they can’t be used on other projects.

I started tinkering on the new system at the end of last year. I began putting all my ideas on my whiteboard (and around it) and started giving it shape.

Somewhere in the middle it looked like this post's top image.

After approximately four months and a few miss attempts, I finally settled for a:

non-significant, easy to communicate, and ready for expansion numbering scheme that has even got a dash number:

Most probably I could have chosen a simpler version without the letter (XXXXX-DD) and never run out of numbers, but I don’t like leaving anything to chance. And most certainly I don’t want to start using an additional digit when I get to 99999-DD.

I also know that if I order the complete standard fastener library from CAD booster, I will already use up to 30000 numbers.

It might happen that we run out of T-numbers in the future, but in that case, I will just choose another letter (anyone I fancy) and I get another 99999 items at my disposal for the same  length.

This was a very short introduction to my new system. Let me know if there is anything you would like me to specifically address in my next blog post.

Btw. if you are wondering why I sometimes talk about documents and sometimes about items, please refer to the invaluable document written by Jörg Eisenträger...it’s priceless!